This would be without a doubt the absolute worst train trip we have ever experienced and that includes Sydney rail experiences! We have used London metro, Paris metro, Los Angeles trains, Tokyo metro, Kyoto metro and Japan rail, Hong Kong Rail, Italian Rail, Barcelona metro, German trains, Finland, Swedish, Danish and Singapore trains, Melbourne, Sydney and Brisbane rail and yes this Swiss one is without doubt the very worst by a long margin.

Booking this trip was unavailable until a month prior via the SBB website. First class was 350 CHF and second class 198 CHF prices which are way above any similar and superior rail prices we have used elsewhere.

Booked and paid for this train online with the 198 CHF second class tickets to be collected at a station or SBB office in Switzerland.

Picked up the tickets at the SBB office in Bern above the station while organising a swiss pass.

The SBB EC51 originates from Basel and we were catching it on a Saturday morning from Bern. Did not realise that the seats were allocated until we boarded the train and we had to move from the far end of wagon 5 to wagon 4 with 2 suitcases.

People had suitcases stacked in the isle and made absolutely no attempt to move them or help us pass.

By the time we got to the rear of wagon 4 there were push bikes and luggage filling and overflowing from both the luggage areas and people already standing in the areas outside the compartments between carriages.

As a result we were stuck on the steps at the rear of wagon 4 and the steps on the other side were occupied by someone else with their bags.

We checked the seating and we had been seated apart on opposite sides of the carriage one with a window and one with an aisle and they were both occupied by people anyway.

A lot more people boarded at Thun and Spiez and were lined up almost right through the carriage by Visp.

At Visp the people lined up started exiting the train via the nearby door in the next  carrige because we could not move at all without actually getting off the train with all our bags. Next thing this total prick comes down the line and starts shaking his head furiously and then before I realised what was going on he grabbed one of our bags and threw it out of his way into some one that was walking past and knocked them over into the opposite stairwell and other people, then shoved past me and got off through the door behind me.

More people boarded with bags at Brig. Some of the people who boarded at Brig had to stand in the toilet and were taking photos of how over crowded the carriage, entry areas and baggage areas were.

We did not see a single ticket inspector on this train until after Domodossola. 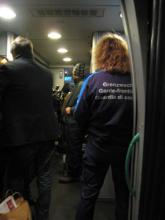 We very much doubt that we will ever revisit Switzerland as a result of this experience and the cost. We can see absolutely no reason to use SBB again. Better faster and much more comfortable to fly.

The above photo is after the carriage cleared considerably after Visp and Brig stations. 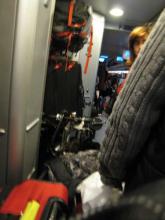 The rear area of Wagon 4 on SBB EC51 and this is after a many of people with all their snow skiing gear got off at Visp and Brig!

The above image illustrates how passengers were forced to stand in stairs at door exits and hold their luggage due to severe over crowding. 198.00 CHF for 2 people to travel like this! 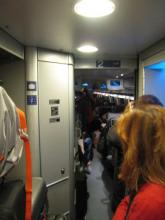 This image shows many people and their bags still blocking aisles after a lot of passengers got off at Visp and Brig. The bluish light at the top right of the image above other passengers heads is the toilet, and elderly passenger found this was the only place to sit and others were standing in there earlier.