Recently flew Qantas from Sydney to Brisbane on QF 528 and back to Sydney on QF 549. Both aircraft servicing these flights were newer Boeing 737 with the aircraft on the return leg configured internally with the "sky interior".

We arrived at the terminal with not much time to spare due to slow traffic traveling in from home on a raining Friday and we briefly visited the Qantas frequent flyer lounge in Sydney using our status as we were flying economy.

These 737 aircraft would not be my first choice with their 3 + 3 seating arrangement but unfortunately since Qantas retired the 767 there is not many other options on this route. I find the seating very close to rows in front on these new layout Qantas Boeing 737. In the past we used our status to access the exit rows but once again Qantas devalued their frequent flyer program by placing exit rows up for grabs to everyone for an additional cost, the same cost for holders of status and for those without.

We visited the Qantas frequent flyer lounge in Brisbane which has been progressively refurbished over the past couple of years. The lounge was rather busy on this Sunday afternoon. 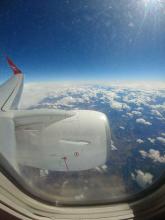 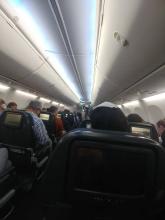 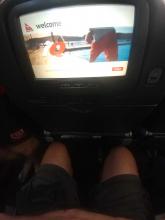 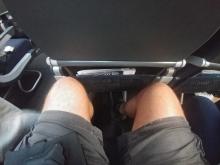